Decided to go and try the same stretch of river I fished last Sunday as it had more water than where I wanted to Go.considering the morning was fine and I went to the tip to dump some rubbish in the morning , the rain came and was a good downpour here it didn’t effect the levels on the ribble so time to set of at 5pm and make my way there .I was in my spot and fishing two rods and it was a tad breezy and a good chop on the river.As the sun was dropping from the sky in the distance all I had to show for my efforts was a couple of twitches.Just before the light went I had a good pull and barbel on . 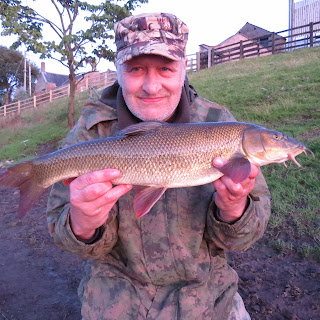 Taken on a boilie with paste wrapped round. A good fight and was surprised it didn’t go bigger but it’s a Barbel and that is what I’m after.The wind had calmed down and I kept the feed going in every 20 minutes.I had a few twitches and pulls but nothing came of those so I switched baits and fished 2 boilies instead of pellet boilie.As the evening wore on it was looking dire the river was flat calm and saw many anglers leaving the river early.I gave it till 10-30pm and packed up .I’m disappointed the fishing was poor.Glad to be alive and back out.

Till I write again .