Having had a day off yday and having lobworms left over and needed to be used up it would be rude not to have a perch session .i decided to take a gamble on two float rods, my usual 13 foot and pin and a shorter rod on an alarm as there’s not a lot of room in these pegs .The day started out not too bright and by 10am I’d had 1 small perch on each rod,shortly followed by another smaller one on the pin rod.I kept trickling the maggots and chopped lobs in little and often .Just before 12 I had a beep and the float sailed away for a nice perch just over a pound .By now the cloud level had dropped and there was a faint mist on the lake .My next bite that came was a lot bigger than my previous Perch so I took a quick photo in case it was the biggest of the day . 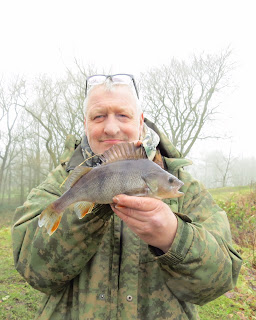 A lovely Perch, I didn’t bother weighing but was well pleased with this one .

I kept the feed going in over each float and at around 1-30 my float dipped and as I lifted into the fish I knew this one was a better stamp, nice fight on the centre pin. 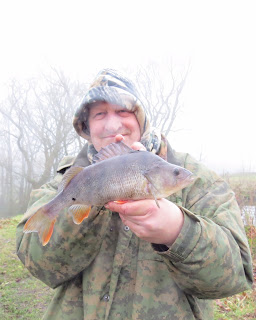 Not a great photo due to the mist and light drizzle , But a New PB for this lake of 2 LB 1 oz well chuffed with this one .

So with 6 perch in total I thought I might bag a few more .The mist got thicker and the pressure was rising , plenty of signs of perch chasing fry and plenty fish topping but that would be it and I packed up at 4pm. 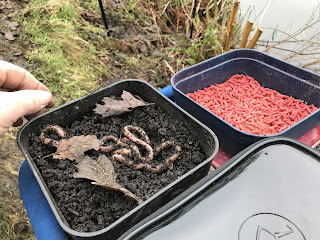 The Bait , Great Lobworms from Willys worms, check them out super hast delivery aswell.
Time to go, Till I’m out again , Great Times .
Posted by Pete777 at 12:13