So me and Chris were going back to the water we had a reccy on last week fishing for roach with 2 rods this time.Time to dust of my John Wilson 1.25 tc rods .For me it was helicopter rigs and maggot and castor hook baits, Chris was similar but he was trying out some roach black groundbait . The weather looked great, Low Pressure, chance of some rain so packed the brolly shelter to keep the elements out and sit back and wait for those alarms to scream. We arrived at the venue and the two pegs we wanted , one was taken so I took a peg further round the point and Chris dropped in a peg that he would move out of after casting around.It was going to be a waiting game for these roach so casting out every 15 minutes for me and keep those maggots going in The feeding windows were after 12 last week , this week bang on 11 my first bite . 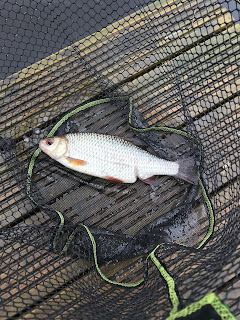 My first roach, an unusual chunk missing , anyone elaborate.Anyway between 11 and 1pm I had taken 4 roach and the biggest was 1lb 4.Chris was now casting around and being unsuccessful getting a bite. It would be late afternoon when the rods came alive again , Taking a few more roach of which one looked slightly bigger but didn’t weigh it . As Dusk was approaching we would see if they would feed again.Chris wasn’t having any look at all and it was gonna be cheque book and pen for him.The light faded and no more bites came .Chris was quick to pick up he wasn’t in the right area and plans were made for our next trip. 6 Roach in total for me, Biggest1lb 4. 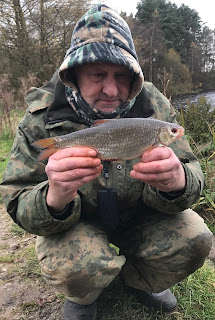